A pair of streaks were ended this past weekend as the World of Outlaws (WoO) Craftsman Sprint Car Series made its way to Thunderbowl Raceway in Tulare, California. Tony Stewart-Curb Agajanian Racing (TSR) driver Donny Schatz and the Arctic Cat/Ford Performance-backed team led the traveling Sprint car stars to the Golden State for the first of seven races over a three-week stretch as winners of five consecutive WoO A-Feature events.

The winning streak came to a close Friday when Schatz finished seventh in the 35-lap A-Feature, but the eight-time and reigning champion bounced back Saturday by making a late-race pass for the lead behind the wheel of the TSR No. 15 Arctic Cat/Ford Performance/Curb J&J, scoring his first win at the 1/3-mile, high-banked dirt oval since 2007 and ending a 15-race winless drought at the facility. 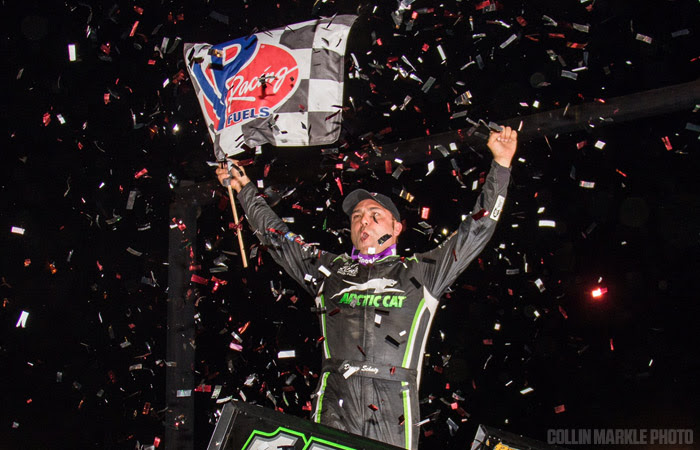 “It feels really good to finally say we won in Tulare again,” Schatz said following his sixth WoO A-Feature win in the first eight races of 2017. “I get all the credit, but it’s really all about my team. We have an incredible group of people who work on this racecar and that makes it so much fun. I can’t thank all our sponsors enough for supporting us and giving us the opportunity to win races. We finished seventh last night and, for us here, that was a good finish. We learned some things throughout the night and my guys just kept tweaking things to make this Arctic Cat/Ford Performance car better and better. I didn’t think the track would take rubber so it kind of caught me by surprise. I really tried to save my tires and, when we got to traffic late in the race, the pace slowed down a lot. I decided I might as well try something and luckily it worked. We’re having a great time and I can’t wait to get back in the car Friday at Stockton and try to do it again.”

The mantra for the season has been to get better at things and places. A furious start to the season has been the result of preparation since last fall. Returning to Thunderbowl Raceway was a reminder of one the team’s most difficult nights in 2016, when it failed to qualify for the A-Feature. The Arctic Cat/Ford Performance team got off to good start when Schatz qualified eighth in the field of 36 cars. He won the fourth heat and finished second in the Craftsman Club Dash. In the 35-lap A-Feature, Schatz bounced between third and fifth for most of the race before finishing seventh. The improvement continued Saturday night with Schatz qualifying third and again taking the victory in his heat. He finished fourth in the Craftsman Club Dash and started the main event fourth. With Kasey Kahne Racing’s Daryn Pittman and Brad Sweet setting the pace pounding the cushion early, Schatz searched the track for alternate lines. Midway through the race, the surface began taking rubber through the middle, forcing everyone to run the same line. Schatz continued searching and made a bold move with three laps remaining by going to the outside of Sweet coming out of turn four and passing Pittman for the lead coming out of turn two the next circuit. The savvy veteran pulled away during the final lap and claimed his second career A-Feature triumph at Thunderbowl Raceway.

Race Notes:
• The two nights of racing at Thunderbowl Raceway continued the Outlaws spring venture to the 1/3-mile high-banked, dirt oval. This weekend marked the 11th consecutive season for “The Greatest Show on Dirt” at the central California track.

• The five-race winning streak from Feb.19 through March 10 was tied for the second longest for Schatz in his 21-year WoO career. His longest winning streak of six races came in August and September of 2014. He has posted win streaks of at least four races in each of the previous four seasons.

• Schatz maintained his lead the WoO championship standings and carries a 72-point lead over Brad Sweet into this weekend’s action in Stockton.

Up Next:
The California tour continues next weekend with a the two-night FVP Western Spring Shootout at the Stockton Dirt Track. Schatz has been a factor in five of the six A-Feature events at the 3/8-mile dirt oval on the San Joaquin Fairgrounds where he is a three-time winner, including both events in 2016.