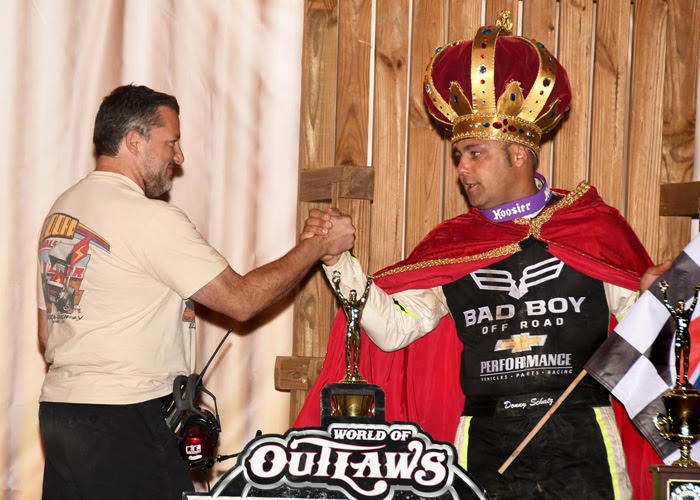 “This is unbelievable,” Schatz said following the emotional victory. “It’s been a challenge here all weekend and it’s one of those places, we felt like we’ve been good at the Royal and we’ve maybe just done the wrong things. But not tonight. We were awesome all night. These guys (Rick Warner, Steve Swenson and Brad Mariscotti) got the car qualified well, got through the heat – the car was awesome in the Heat race. It’s such a blast to get in the seat of this Bad Boy Off Road/Chevrolet Performance machine. I know I get to stand here but this race team is what wins these races. Tony Stewart has surrounded me with guys who are incredible at what they do. You can’t say enough about them. They are the ones who need to be wearing this uniform. They are the ones responsible for making that racecar. I’m just so happy for everyone associated with us at TSR, my family and all the fans who came out and packed this place. What a great night.”

Schatz was the class of Saturday’s 60-car field behind the wheel of the TSR No. 15 Bad Boy Off Road/Chevrolet Performance J&J. He timed in fourth fastest and drove a near perfect heat race, charging from fifth to win it. The heat four victory earned him the third starting position in the 40-lap A-Feature. The pace was fast and furious during the first 10 laps and Schatz was forced to remain calm and patient as his car continued to get better with each lap.

Brian Brown led the first nine laps before Sammy Swindell took over the top spot on lap 10. Brad Sweet became the race’s third leader on lap 13. Schatz had fallen back to fifth early and worked his way past Brown and Swindell before catching Sweet on lap 19. The two exchanged the lead around the half-mile, dirt oval, but it was Schatz who officially led lap 20. He pulled away from Sweet and continued negotiating traffic as the race had the crowd in a frenzy. Christopher Bell started 14th and charged to the runner-up position driving a second car from the Tony Stewart stable before bringing the action to a halt when he made contact with the turn-four fence, resulting in the car stopping abruptly and turning over.

Race officials opened the track up for crews to make adjustments on their cars while fence repair was taking place. TSR’s crew added fuel and checked air pressures during the short break. A small air leak in the right-rear tire was discovered and the team quickly plugged the hole with a temporary plug just as officials were calling for all crewman to leave the track. 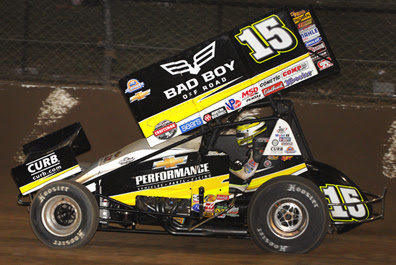 On the lap-26 restart, Schatz fended off a slide job from Rico Abreu in turns one and two and began making consistent laps entering through the middle of turn three and exiting the cushion in turn four. As the laps counted down, Schatz continued running the high side in turns one and two and was able to increase his lead, but Abreu would close the gap in three and four. The two took the white flag nearly side-by-side and Abreu tried one last slider in turns one and two, but Schatz had the momentum and pulled away in the final corners to take the win.
With the victory, the seven-time and reigning WoO champion joined Steve Kinser, Swindell and Jac Haudenschild as the only drivers to win the Kings Royal more than twice. Schatz, the 2007 and 2009 Kings Royal champion, led the final 20 laps of the thrilling 40-lap race to earn his 15th WoO victory of the season and 219th of his illustrious career.

His run into Eldora’s history books started earlier in the week when he drove the TSR No. 15 Bad Boy Off Road/Chevrolet Performance J&J from 15th to victory in the 28th Brad Doty Classic at Attica (Ohio) Raceway Park. For the first time in the event’s 33-year history, the Kings Royal weekend included three consecutive nights of WoO competition. In Thursday’s ‘Jokers Wild’ event, Schatz was on a mission from the start when he turned the third-fastest qualifying lap, won the first heat and finished third in the dash. In the A-Feature, he stalked leader David Gravel more than half the race and made a last-lap move to pull even as the two exited turn four, but Gravel had enough momentum to score the victory.

In Friday’s traditional Knight Before the Kings Royal, Schatz had very similar results. He qualified second, won heat two and finished second in the dash to earn the third starting spot. Polesitter Joey Saldana’s machine struggled to get going as the green flag waved for the 30-lap A-Feature and all Schatz could do was to keep from running over him. Daryn Pittman grabbed the lead and set a torrid pace. Schatz passed Saldana for second on lap 10 but could never reel in Pittman the rest of the way.

The two wins and two second-place finishes continued a stretch of seven consecutive WoO races where Schatz has finished either first or second. He continues to lead the championship standings through 51 races with 7,078 points and his a 186-point lead over Sweet. His 15 wins tops all drivers, as well as his 36 top-fives, 48 top-10s and nine KSE Hard Charger Awards.

The beat goes on this week with a pair of $25,000-to-win A-Features on the line as the “Month of Money” continues. First up is Tuesday’s Don Martin Memorial Silver Cup at Lernerville Speedway in Sarver, Pennsylvania. After several years of having Twin 30s for the Silver Cup, Tuesday’s event will return to the traditional format of a single 40-lap A-Feature with the winner earning $25,000. The Summer Nationals at Williams Grove Speedway in Mechanicsburg, Pennsylvania follows on Friday andSaturday night. Saturday’s 30-lap A-Feature will serve as the annual Morgan Cup grudge match between the Outlaws and Pennsylvania Posse with the winner taking $25,000.