Sprint car champion Donny Schatz never would consider himself a historian, but the accomplishments he’s earned over the past two decades have etched his name in the history books as one of short-track racing’s best.

Schatz, the driver for Tony Stewart/Curb-Agajanian Racing (TSR) entry, continues to build his legacy while competing in the World of Outlaws (WoO) NOS Energy Sprint Car Series. The WoO, which was started in 1978 to organize the most talented sprint car racers, has tested many competitors over the past five decades. Schatz worked tirelessly to reach champion status, earning his stripes as a young rookie and climbing to the top in a sport dominated by iconic figures. In 2018, the Fargo, North Dakota resident continued raising the bar in series that is one of the most demanding in all of motorsports by earning his tenth WoO title in 22 years of competing with “The Greatest Show on Dirt.”

“I appreciate everyone’s kind words,” expressed Schatz in November 2018. “It’s very overwhelming. Twenty-two times I’ve stood on this stage as a World of Outlaw. I would never have guessed that would be the case back in 1997 when I came out here. Back then I don’t know what I was thinking, but somehow I won the rookie of the year and to this day it’s still my most prized possession. Here we are 22 years later and it still hasn’t all quite sunk in. What has sunk in is the importance of the people that you are surrounded by. I am standing here as a ten-time champion because of the organization that Tony Stewart has built and continues to refine. It is nothing short of incredible. It’s a huge honor for me to be a small part of this team’s success.”

Schatz embarked on his eleventh season driving for three-time NASCAR Cup Series champion Tony Stewart in 2018 and when he took the final checkered flag of 2018, Schatz completed another historic chapter in his WoO career. In 71 nights of racing, Schatz won 22 times, finished inside the top-five 52 times and raced to a top-10 on 66 occasions.  Following his sixth consecutive season of at least 20 wins, the 41-year-old now has 283 career WoO wins, ranking third all-time.

All of this came on the heels of a 2017 season, where expectations were high, and the end result of 20 WoO A-Feature wins, 66 top-fives and 74 top-10s in 81 races led to a fourth consecutive and ninth career WoO championship.

It took Schatz 10 seasons with the Outlaws before he broke through and won his first championship in 2006. In his second decade of competition with the Outlaws, he’s won eight of the 10 championships and finished second the two seasons he didn’t come out on top. Those are the kind of statistics Steve Kinser put up during the first two decades of the World of Outlaws and the reason so many of his peers called him the modern day Kinser during Sunday’s event.

Meeting challenges head-on has been a true asset for nine-time WoO champion Schatz. After capturing a pair of titles driving a sprint car owned by his family, Schatz made a seamless transition to driving for TSR. He has thrived under the spotlight of racing for three-time NASCAR Monster Energy champion Tony Stewart and continues to prove his thirst for success is far from quenched. 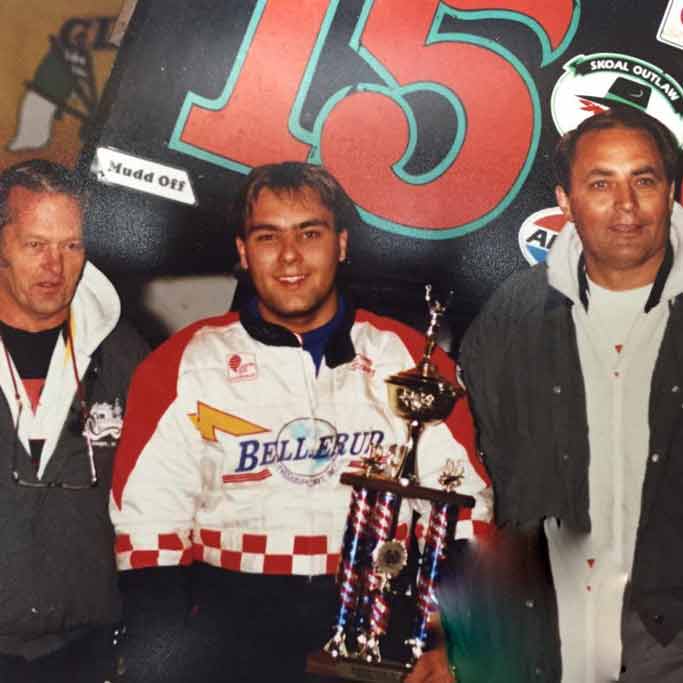 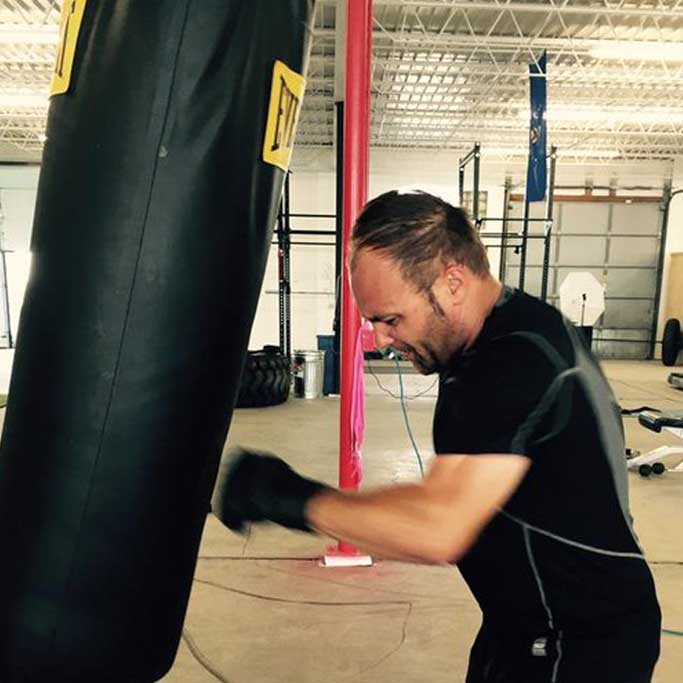 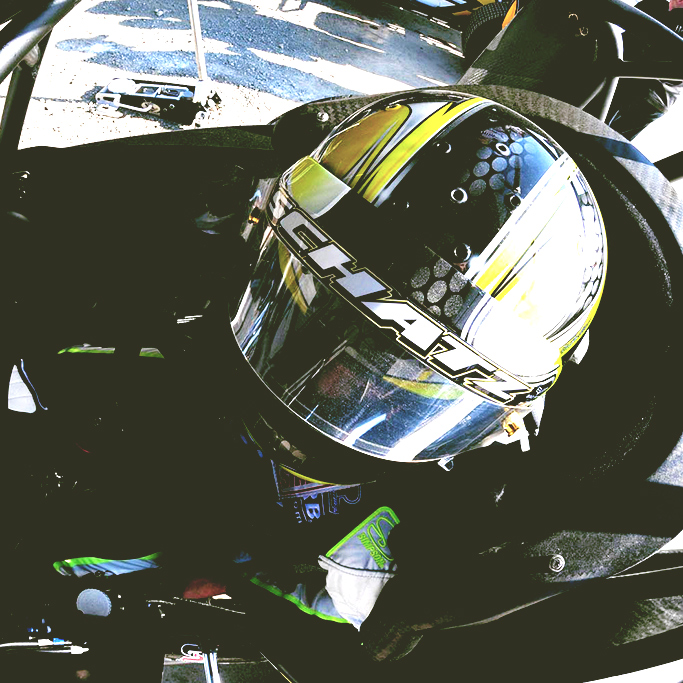 Schatz knows it wasn’t easy getting to this point in his career. His job is to sit behind the wheel of a 1,250-pound, 800-plus-horsepower, open-wheel winged sprint car close to 90 nights a year and perform at his best every night.

He learned the fundamentals of becoming a WoO champion by spending many grueling years chasing sprint car legends Steve Kinser, Swindell and Mark Kinser around dirt tracks all across America. Those lessons not only allowed Schatz to reach the sport’s pinnacle after the 2006 season, but they helped him continue to be a driver to beat at every WoO event.

“I’m really proud to be able to continue to race at the level we do,” Schatz said. “In 2008, we didn’t change our path to the championship. We simply changed the way we got there. When Tony Stewart and Jimmy Carr talked to me a few years ago about driving for TSR, I’m pretty sure the results of those championship seasons are what they had in mind. I know I wanted to keep winning races and, ultimately, championships. Each year, we try to set the bar a little higher. After coming up short in the championship battle, we continued the course and focused on things that would help us be at or near the top of the board every time we got on the track. With a lot of work, we were able to get back on top, and now we’re working to stay here for a long time.”

The journey from being a teenage weekend racer to making sprint car racing history for Schatz has been filled with lots of laps, miles, hours and effort perfecting his craft over the last 20 years.

As the oldest child of Danny and Diane Schatz, Donny was always the go-getter. Whether it was riding next to his dad behind mammoth Belgian draft horses at competitions around country as a 5-year-old, or jumping onto the ice and playing youth hockey like most young kids from the frigid north, Schatz wasn’t afraid to take a chance. His chance at racing began thanks in part to a special gift on his 10thbirthday. Racing is in the Schatz genes. Three generations have steered the wheel of a No. 15 racecar. Danny drove sprint cars in the upper Midwest during the early 1970s, and he supported his son trying it. Four years of competitive go-kart racing followed that memorable 10th birthday gift before Schatz got the chance of a lifetime as a 14-year-old at River Cities Speedway in Grand Forks, N.D. He was allowed to “hot-lap” a 360 sprint car and, from that day on, driving a sprint car was all he could think about.

His first race in his family-owned sprint car came in 1993 at the Missouri State Fairgrounds in Sedalia. For the rest of the summer, the family tried to find tracks that would allow a 15-year-old kid to compete. Once he turned 16, Schatz started racing at weekly events in Fargo, N.D., and Sioux Falls, S.D., and in events throughout the upper Midwest.

Schatz gained national attention in the summer of 1996 when he qualified for his first Kings Royal and finished an impressive eighth on national television. Later that season, he claimed the WISSOTA National Sprint Car championship.

In January 1997, Schatz began what now has become a 12-year odyssey with the World of Outlaws. He had a spirited duel with Paul McMahan to capture the coveted rookie award at the end of his first season. In August 1998, he joined the exclusive list of WoO winners by scoring his first triumph in Cottage Grove, Ore. Each of the next two seasons, Schatz would score major wins, first in 1999 when he won the prestigious Western World at Manzanita Speedway in Phoenix, and in 2000 when he scored his first National Open at Williams Grove.

Double-digit victories in 2001 proved Schatz was up to the challenge of finishing inside the top five of the WoO standings. Adding another major-event triumph to his list of accomplishments – the $100,000-to-win Historical Big One at Eldora Speedway in Rossburg, Ohio – and his breakthrough victory at the hometown Duel in the Dakotas were the highlights from an inconsistent 2002 campaign.

After posting 13 wins in 2003 and claiming his first Gold Cup Race of Champions in Chico, Calif., and a second National Open win during the 2004 season, Schatz again was positioned to challenge for the WoO title the next season.

Following a difficult beginning to the 2005 season, veteran crew chief Ricky Warner joined the Schatz Motorsports team at the Knoxville Nationals, and Schatz finished second in the season’s biggest race. The duo clicked and reeled off seven wins, including a third National Open triumph, to finish the year on a roll looking toward 2006.

After nine seasons on the road with the Outlaws, Schatz finally overcame the greatest challenge of his career by winning his first WoO championship in 2006. He won 17 WoO A-Features, a pair of preliminary features, and his first Knoxville Nationals crown after finishing second four times.

The challenge in 2007 was to back up a championship campaign that some critics claimed only came because of a power struggle within the sport that sent a number of drivers, including 20-time WoO champion Steve Kinser, off to start a rival series.

Schatz loved the challenge of proving 2006 was just the beginning as he dominated the 2007 season, winning the opening-night feature and never looking back. He totaled 19 WoO A-Feature wins and repeated his Knoxville Nationals victory. He became the first driver to win the Knoxville Nationals, Kings Royal, Silver Cup, Summer Nationals and National Open in the same season.

For 15 seasons, Schatz drove a family-owned car for his parents. Two championships and 88 victories in World of Outlaws action were just part of their success as a team. The foundation they built continued in 2008 as Schatz again proved the doubters wrong, this time driving for TSR.

History shows that each WoO championship has provided Schatz a new challenge. After successfully making the transition to TSR in 2008, Schatz followed his season-ending World Finals victory in November 2008 with a thrilling last-to-first run in the 2009 season-opening race in February. The win was his first of four triumphs during the first six nights of competition. After another victory in Las Vegas to close February, it was clear the champion wasn’t going to be satisfied with three titles.

Success also came in 2009 at Knoxville and Eldora, the sport’s signature dirt tracks. On consecutive weekends in May, Schatz won WoO features at Knoxville and Eldora to regain the Outlaws championship standings lead after briefly dropping to third. Those wins provided a bit of foreshadowing for the competition. In July, Schatz captured his second career $50,000-to-win Kings Royal at Eldora and one month later drove a Mario Andretti/STP-themed No. 15 to victory at the Knoxville Nationals.

His performance on the track resulted in championship seasons and earned Schatz special recognition, including five times being named a First team All-American by the American Auto Racing Writers and Broadcasters Association. He earned the 2007 Economaki Champion of Champions Award, and the National Sprint Car Poll voted Schatz its “Driver of the Year” following each of his five WoO championship seasons.

Since 1999, Schatz has spent time during the winter months in the U.S. racing sprint cars in Australia. His success “Down Under” has been remarkable, as he’s won a number of major events both in the World Series Sprintcar tour and major events at Sydney Speedway, Supercheap Auto Archerfield Speedway in Brisbane and at Premier Speedway in Warrnambool. As a result, he’s created quite a following in Australia.

During the past three seasons, Schatz has expanded his racing to also include Dirt Late Model competition. After finishing fourth in the 2012 Prelude to the Dream event at Tony Stewart’s Eldora Speedway in Rossburg, Ohio, Schatz has continued to compete more and more behind the wheel of his No. 15 Petro of Fargo/Crossroads Truckstop/Fastlane Car Wash backed machine. He earned victories in North Dakota in each of the last three seasons. He also made his World of Outlaws Late Model Series debut in July 2014 and competed in both the Knoxville Late Model Nationals and Bad Boy Buggies World Finals in each of the last three seasons.

Schatz and his wife, Erica, reside in Fargo, N.D., with their daughter, Savanna. Schatz is a licensed pilot and spends a great deal of time working with his parents in their family truck stop businesses in Fargo and Minot. He is an avid outdoorsman who enjoys hunting and snowmobiling.