INDIANAPOLIS (Nov. 1, 2016) – It was only fitting that Tony Stewart-Curb Agajanian Racing’s (TSR) Donny Schatz was the last one standing during the 2016 World of Outlaws (WoO) Craftsman Sprint Car Series “Night of Champions” banquet Sunday evening. One night after racing to his 25th WoO victory of the season, he received his eighth series championship trophy following remarks from those who witnessed up close his historic 20th consecutive season of competition with “The Greatest Show on Dirt”.
“I appreciate everyone’s kind words,” Schatz said. “It’s very overwhelming. Twenty times I’ve stood on this stage as a World of Outlaw. I would never have guessed that would be the case back in 1997 when I came out here. Back then, I don’t know what I was thinking, but somehow I won the rookie of the year and to this day it’s still my most prized possession. Here we are 20 years later and it still hasn’t all quite sunk in. What has sunk in is the importance of the people you are surrounded by. I am standing here as an eight-time champion because of the organization Tony Stewart has built and continues to refine. It is nothing short of incredible. It’s a huge honor for me to be a small part of this team’s success.”

Schatz finished off his third consecutive WoO championship season as the only driver in the series’ 39-year history to win more than 20 WoO A-Features in four consecutive seasons. In that span, he’s collected 105 A-Feature triumphs but, as he reflected on where this championship run ranks with the rest, the theme was about never giving up.

“In 2015, we won 31 races and were never really pressed in the championship standings,” he said. “We started this year off by failing to finish the first race and ended up digging ourselves a pretty big hole – something like 100 points – right out of the gate. Then we head west and miss a race at Tulare and that put us behind even more. That’s when you know what kind of team you have. Rick (Warner), Steve (Swenson) and Brad (Mariscotti) dug in deep and we started chipping our way back. So, to go from more than a 100-point deficit to build a 300-point victory margin and have four DNFs, that’s pretty amazing and just shows how good these guys are.”

It took Schatz 10 seasons with the Outlaws before he broke through and won his first championship in 2006. In his second decade of competition with the Outlaws, he’s won seven of the 10 championships and finished second the three seasons he didn’t come out on top. That’s the kind of championship heritage the legendary Steve Kinser put up during the WoO’s first two decades and the reason so many of Schatz’s peers called him the modern-day Kinser during Sunday’s banquet.

The Fargo, North Dakota racer was quick to point out that it’s the entire group that makes winning races and ultimately championships possible starting with his team owner. The silver lining is longevity, and that is apparent with Schatz completing his ninth season as driver for three-time NASCAR Sprint Cup Series champion Tony Stewart and delivering the organization’s seventh WoO championship and 21stoverall when combined with TSR’s 14 United States Auto Club (USAC) titles. Schatz and crew chief Rick Warner finished their 11th season together, and this season was the seventh for car chief Steve Swenson with the TSR No. 15. Brad Mariscotti, a decorated USAC champion crew chief with TSR, proved to be a huge asset throughout his rookie season with the team and was rewarded by earning his first WoO title. 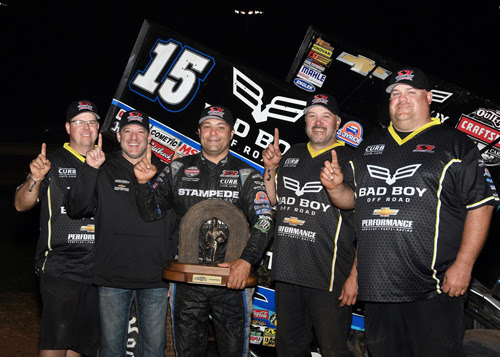 “I’m extremely proud of this team and what they accomplished this year,” Stewart said. “This is probably the one group that has gelled together more than any team I’ve ever been around. The chemistry that Donny and Rick have, and then compound that with the efforts of Steve and Brad, you don’t see it anywhere else in the pits and that’s why they have the success they do. We’re thrilled to win another championship with Bad Boy Off Road and Chevrolet Performance and have partners like Mike Curb also part of this incredible ride. These championships are very difficult to earn and there’s no way we could compete at the level we do without their commitment to our organization and these guys. These are exciting times and we’re looking forward to continuing to make history for years to come.”

Schatz, driver of the TSR No. 15 Bad Boy Off Road/Chevrolet Performance J&J, and his TSR crew had very optimistic goals to reach following an incredible 2015 season. With championship experience overflowing and a commitment to winning, Schatz headed off to Florida last winter to begin his quest for an eighth championship. The first two nights of the season provided a hint of what was in store. In the opener, Schatz qualified 17th and was forced to start the 30-lap A-Feature 17th. He roared his way forward, picking off cars fast and furiously, and he reached the back bumper of leader Daryn Pittman on lap 20. He never got the opportunity to make a bid for the lead because a component failure in the engine ended his run two laps later and the result was his first DNF in 178 events.

The team followed its first taste of adversity by coming back 24 hours later and scoring the victory in the season’s second A-Feature as Schatz masterfully outmaneuvered Brad Sweet for the win. So it left Florida and picked up win number two in Las Vegas before not qualifying for the A-Feature at Thunderbowl Raceway in Tulare, California. And, in typical fashion, Schatz and company won the next two races in Stockton and continued their charge back into contention in the championship standings throughout the months of April and May. Schatz took the lead in the championship following a June 8victory at Lincoln Park Speedway in Putmanville, Indiana and never relinquished the top spot.

A surge in early July that included three wins in four starts and, two weeks later, a Brad Doty Classic victory and his Kings Royal triumph, separated him from the competition. After coming up an agonizingly close second at the Knoxville (Iowa) Nationals, the team again showed its grit by amassing a four-race winning streak to cement its run to the title. The team was a model of consistency, closing the championship quest with 13 consecutive top-seven finishes, and Saturday’s win marked the sixth time in Schatz’s 20-year WoO career that he has won the final WoO show of the year.

When he took the final checkered flag Saturday night, he completed another historic chapter in his WoO career. In 84 nights of racing, Schatz won 25 times, finished inside the top-five 60 times and raced to a top-10 on 77 occasions. In Friday’s World Finals opener, he charged from 13th to third to earn his 10thKSE Hard Charger Award of the season.

“There were a lot of factors that went into winning this championship,” Schatz said. “I want to congratulate all of the teams that started this journey in February and pushed our team to continue to get better. There was some great racing all season and you guys helped put on incredible shows for what I consider the best fans out there. It’s been a privilege to represent the World of Outlaws, and now also Craftsman as your champion, and I’m honored that I get to do it again next year. Thank you World of Outlaws for continuing on Ted Johnson’s vision and allowing me the opportunity to do something I dreamed of.”